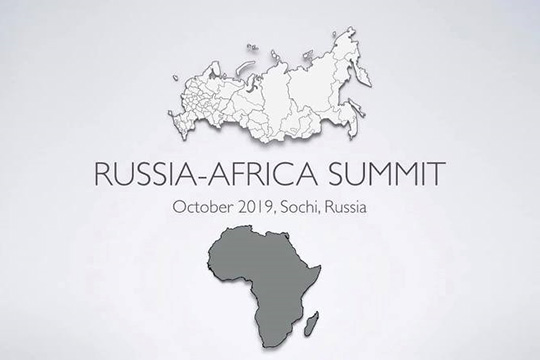 The first-ever Russia-Africa summit will be held from 23-24 October in Sochi, Russia, marking the culminating point of the return of Russia to Africa, with more than 50 African leaders and over 3,000 delegates invited. This convening is only another illustration of the recent increase in economic, security, and political engagements to foster Russia-Africa relations.

The summit is expected to deepen relations between the Russian Federation and countries of the African continent at both bilateral and multilateral levels; forge closer collaboration on regional and international issues of common interest, raise strategic dialogue between Russia and African countries to a qualitatively higher level, and contribute to peace, security and sustainable development on the African continent.  The Russia-Africa Summit will also contribute towards the overall objective of addressing the aspirations of African countries as encapsulated in Agenda 2063. As the continental development blueprint, Agenda 2063 calls for a people-centered developmental process that ensures, inter alia, economic diversification and growth in order to eradicate poverty, unemployment and inequality

On 16th of October, a seminar under the theme “Discussion in the Run-Up to the Russia-Africa Summit” was held in South Africa, unique strategic partner of Russia in BRICS organization, at the University of Pretoria. The main speaker at the event was the Ambassador of the Russian Federation to South Africa Ilya Rogachev, who delivered a comprehensive speech, which described in detail the essence of the upcoming historical event.

Following is his presentation:

This will be the first event of such scale and magnitude marking an important milestone in the history of relations between Russia and the African continent. All eyes are on us now. I would like to remind that Russia, in all of its incarnations, and the peoples of Africa have always walked hand in hand through history.

We share a common and eventful past, where as allies we strived together for a better world. The Soviet Union was the only global power that has never pursued colonial policies and had never had a detrimental presence in Africa. The very idea of colonialism has always been an alien concept to us, one that to our mind should be abolished from the face of the Earth in all its forms.

The Soviet Union was most heavily involved in the rise of the African continent to independency. Among the most important cornerstones of the Soviet foreign policy was bringing an end to the colonial era, supporting national liberation movements, providing all kinds of assistance to young African nations: economic, infrastructural, military, humanitarian and educational. These pages of history cannot and shall not be rewritten, this friendship will forever be embedded in the history of relations between Russia and Africa.

USSR’s involvement and interest in Africa were guided by the imperative to «protect the interests of the oppressed nations and their right for self-determination and creation of sovereign states». Next year marks the 60th anniversary of the adoption of the United Nations Declaration on the Granting of Independence to Colonial Countries and Peoples of 1960. This historical document was drafted on the initiative of the USSR, who had been championing the cause of a free and independent Africa on the global arena for many years.

Needless to say that this enormous and, I would like to stress – selfless – support that the Soviet Union rendered the people of Africa throughout the XX century won over many hearts on this continent.

Sadly, the collapse of the Soviet Union put our partnership on halt. The 1990s were a time of hardship for my country and its people. Even after the resurgence of the 2000s it took us some time to gather and re-establish ourselves as a global leader on the international arena and a prominent economic and technological power. I would not necessarily call these years a time of neglect towards Africa, as some try to put it, but admittedly, to a certain extent we lost the pace and intensity in our cooperation. Speaking in plain terms, now we have some catching up to do.

This is what the upcoming Russia-Africa Summit is meant to achieve: to put our partnership back on track, giving it new dimensions, pertinent to the XXI century, and providing dynamics for further growth. It is designed to set ambitious goals and look for areas of fruitful and practical cooperation. Intergovernmental and business opportunities clearly attract attention from both sides, our mutual interest in deepening cooperation is evidently high. This is why if you look at the expanded programme outlines you would fine nearly every possible topic on the agenda: from the role of media on the African continent to the importance of peaceful conflict resolution.

We envisage both the Summit and the Forum as a prospective platform for regular contacts, governmental and business. It is supposed to be a mechanism, which will allow us to give the much needed impulse to our cooperation, keep track of the progress already made and explore new opportunities. We consider it a platform where equals meet and where every voice is heard.

It is no coincidence that the Summit is hosted jointly by the Russian Federation and the African Union. There is great significance to this fact: unlike some other powers, which are used to looking down at Africa from their high horse, we do not consider Africa and African nations as junior partners. In fact, Russia strives for an equal cooperation based on mutual respect for the interests of all the involved parties.

I would like to draw your attention to this particular aspect, as it is purposefully misrepresented in some of the clearly biased publications and articles that appeared recently in South African press and elsewhere. These experts keep describing Russia’s return to the continent as a premise for a struggle for influence and resources among the global powers.

I would like to discourage that line of thought and tell the analysts, that they are wide off the mark. Some might still be looking at Africa through the lens of a colonial eye. Frankly speaking, this is an outdated and historically void way to behave on the global arena and in international relations. This is not our way. We do not develop and conduct foreign policy and international cooperation from such assessments. Our Western partners keep returning to the concept of a zero-sum game, where one’s gain means another one’s loss – imprinting this crooked assumption on the minds of experts and journalists.

Our mindset is different, we say: let’s cooperate and grow together. Africa is the most dynamically developing continent with rapidly growing economies that shouldn’t be regarded as a mere resource base. It is time to build long-lasting partnerships rooted in the principles of trust and equality. This stance resonates with our African partners. No wonder that our positions on the global arena are largely aligned. We share similar values defined by respect for national sovereignty and international law, as well as similar approaches to tackling current global challenges and threats. The world and the African continent need to find sustainable solutions for pressing issues. It should be done not through a dictate of a group of ‘elite’ countries and the rules that they impose on everyone else, but through the balance of interests and respect for all viewpoints. International law, based on the UN Charter and the existing legal framework, not some new «rules-based order» concepts, should serve as the basis for building relations.

We have always been adamant supporters of the formula «African solutions to African problems», including in the United Nations. It is our firm believe that nations and peoples themselves should resolve their problems, with the expertise and advice of the international community if required. In the past decade we have seen all too well what blatant interference in other countries affairs leads to, the results of the attempts to push for regime change is evident as well – North Africa and the Middle East are still dealing with the fallout from the so-called Arab Spring.

Today Russia enjoys strong bilateral relations with many African countries, South Africa included. The cooperation encompasses many spheres including infrastructure projects, space industry, telecommunication, healthcare, education, tourism, mining and others. The total volume of Russia’s investment in Africa has exceeded 20 billion dollars. The overall trade volume of has increased by many times since the 1990s.

One of the key issues that the African continent faces and that Russia has the expertise to assist with is the energy crisis, a growing shortage of generating capacity that holds back economic development. In 2008, Russian diamond company “Alrosa” finished the construction of Chicapa hydroelectric power plant in Angola; in 2010, Tanzania and Russia signed a deal to build the Rumakali hydropower plant. There are ongoing negotiations on the cooperation in the energy sector with such countries as Sudan, Ethiopia and the DRC.

Russia is helping more than 20 countries in Africa to develop their nuclear industries for energy and medical purposes. In 2014, Russia and Egypt signed an agreement on the construction of El Dabaa nuclear power plant – Russia will provide a $25 bln loan to Egypt for the construction that will create 50’000 job opportunities and add 4,8 GW generation capacity to the grid. In 2017, an agreement on the development of atom energy projects was concluded with Nigeria. A nuclear research centre is to be built in Zambia.

One of the most promising projects in infrastructure development is the establishment of Russian industrial free trade zone in Egypt, which will focus on manufacturing agricultural machinery and hardware. We are also considering participating in the ambitious project of the Trans-African railway connecting Dakar and Djibouti, spanning across the continent.

Russia, and the Soviet Union previously, have always assisted African nations in skill development and education: millions have received highest quality degrees in the past decades, over 15’000 students from African nations are currently studying in Russia. A decision has already been made to substantially increase the number of scholarships in the next few years.

Russia continues to provide humanitarian assistance to those who request it in Africa. In 2017 alone, Russian aid exceeded 1 billion $. Russian Federation is the 5th biggest sponsor of the UNIDO Industrial Development Fund, a top-tier contributor to the UN World Food Programme and the World Health Organisation.

Another important area of cooperation is the assistance in fighting epidemics and diseases that scourge the African continent. For example, the recent outbreak of Ebola virus in the Western African countries prompted Russian doctors to develop not one but two groundbreaking vaccines. The Russian-made vaccines were the first to be tested and to have reach the patients. The vaccines are now being shipped to the Republic of Guinea, the DRC and other countries.

The issues of peace and security are also in the focus of attention. Fighting terrorism, drug- and human-trafficking and other criminal activities are among Russia’s priorities in the international security area. Making certain that conflict resolution in Africa is carried out without the use of violence and within the framework of political dialogue is another keystone of our approach. Russian Foreign Minister Sergey Lavrov has repeatedly extended the country’s full-fledged support to the African Union’s initiative ‘Silencing the guns by 2020’. Last September the Russian Federation as the Chair of the UN Security Council convened a UNSC Meeting on ‘Peace and Security in Africa Partnership to Strengthen Regional Peace and Security’ to give Africa an additional platform.

And this is just the tip of the iceberg whereas Russia-Africa interaction is concerned. So to round it up, the summit has high hopes, but it can already be said with confidence that the event will go down in history as an important milestone in cooperation between Russia and the countries of the continent.