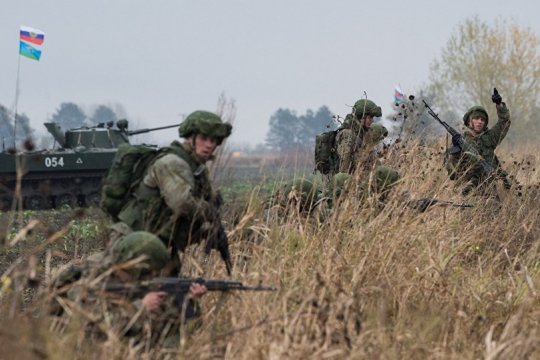 From 24 to 29 October in Serbia was held joint tactical live-fire exercise with air defence missile units of the Serbian Air Defence units and the Russian Aerospace Forces dubbed “Slavic Shield 2019”. The aim of the exercise was to educate and use the joint group of the Serbian Air Defence and the Russian Aerospace Forces in the air defence of the territory and military forces against reconnaissance and enemy activities from airspace, as well as to training and practicing of commands and units for the preparation and execution of an air defence operation.

Russian-Serbian air defense exercise “Slavic shield 2019“ is held for the first time in September this year in the Astrakhan region, on the basis of the Centre for Combat Training and Combat Use of the Aerospace Forces. The exercise consisted of two stages. The first stage of the Russian – Serian air defense exercise “Slavic shield 2019“ was held in Russia and involved the crews of anti-aircraft missile and radio-technical troops of the Russian Air Force and Air Defence of the Armed Forces of the Republic of Serbia, S-400 anti-aircraft missile systems, Pantsir-S anti-aircraft missile and gun systems, and radar stations. During the exercise, the issues of interaction and joint combat use of air defense units of the Aerospace Forces of the Russian Federation and the air force of the air defense of the Republic of Serbia were being worked out.

The second stage of “Slavic shield 2019” was held from 24 to 29 October 2019 in the territory of the Republic of Serbia. The S-400 division units with anti-aircraft missile systems S-400 and aircraft missile and gun system „Pantsir-S“ were transfered by military transport aircraft of the Russian Air Force to the territory of Serbia to participate in the second stage of the joint Russian-Serbian air defense exercise „Slavic shild – 2019“.

As part of the exercise, the Russian S-400 division and the Pantsir-S battery were deployed on the territory of a Serbian air base and were the most important systems in the joint Russian – Serbian air defense exercise „Slavic shield 2019“.

“Today we had a unique opportunity to see how the S-400 battalion works and to see how Pantsir-S works.  As you know, we have purchased, ordered one Pantsir-S system, and we are expecting it in our country soon. This is a fantastic system that targets all flying objects, especially drones and cruise missiles at the distances up to 80 kilometers, tracks everything and it is very difficult to jam their radar, because they have many different codes and many different approaches. Our people are overjoyed, they are training, and I expect that in the next month or two, they will be able to show their lethal effect on an exercise in Serbia also on such cruise missiles and small drones, which are very dangerous for anti-aircraft systems. As for S-400 – if we had two S-400 battalions, no one would ever dare to overfly Serbia – president of the Republic of Serbia Aleksandar Vucic said, accompanied by Serbian Minister of defence Aleksandar Vulin and chief of General Staff of the Serbian Armed Forces, Lieutenant General Milan Mojsilovic. According to him, Serbia is drastically boosting its military capabilities and although is a small country, it`s still not strong enough, but it is many times stronger than earlier.

“With Pantsir coming, these are big things for us. Please look at the Serb soldiers, to see their smiling faces and how happy they are because of everything they saw. And about the S-400 when we got into the cabin – that is where you defend the whole country from. This is incredible power, incredible strength and I congratulate once again our Russian friends for creating such systems and we learn a lot from them, we have learned a lot. I am happy that today we were able to see Brigadier General Tiosav Jankovic, who was there training, who knows a lot and is very important for the establishment of these systems and their operation here on the territory of the Republic of Serbia” – president Vucic said, emphasizing that he had never seen such a thing in his life, even though he was at strategic military airports not far from Moscow. (1)

Also, a Russian-Serbian tactical flight exercise “BARS-2019”  began on October 30 in Russia. In the Astrakhan region the crews of MiG-29SMT fighter jets destroyed more than ten air targets. During the flights, the joint crews carried out practical launches of air-to-air missiles at targets dropped by the target-setting aircraft.(2) In addition, the flight crew of fighter aircraft participating in the exercise, worked out the launches of unguided missiles and firing from at ground targets, indicating the objects of the mock enemy. A day earlier, in the framework of the exercise “BARS-2019”, the crews of Mi-8AMTSH helicopters fulfilled the tasks of search and rescue support of flights and evacuation of the conditionally injured crew. The crews of MiG-29SMT aircraft practiced offensive and defensive actions, as well as interception of air targets. The exercise involves joint crews of two countries on MiG-29SMT airplanes and Mi-8ATMSh helicopters. The drills involved over 10 aircraft of the Russian Aerospace Forces.

The possibility for the Serbian army to train with the Russian army on such drills is very important, because the Serbian army has gained valuable experience. Also, the arrival of the S-400 system in Serbia is a clear message from Russia, that Russia is interested for the Balkans and to protect its main ally in the region - Serbia.