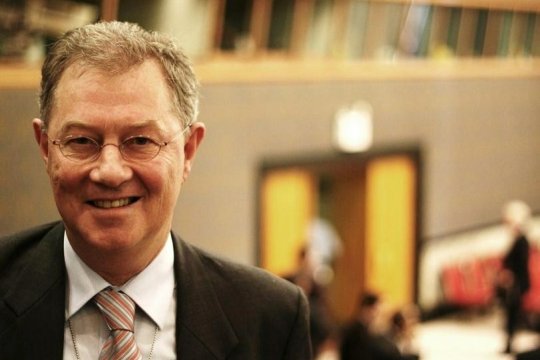 On February 21, Dutch diplomat Robert H. Serry delivered a lecture in Moscow, titled "The UN and International Conflict Resolution.” Robert Serry previously served as the United Nations Special Coordinator for the Middle East peace process, and also as a personal representative of the UN Secretary-General to the Palestine Liberation Organization and the Palestinian Authority in 2007-2015. Presently, Mr. Serry is looking for ways to end the crisis in Donbass.

While noting that in 2020 the world is celebrating the 75th anniversary of the United Nations, which is a great occasion, Robert Serry still added that “by the end of 2020 the credibility of the UN in conflict resolution has been much undermined.” According to him, the crisis the United Nations is experiencing today is not solely due to the “recent” controversial events in Syria, Libya or Ukraine, but the roots of the UN’s current “weakness” go back to the 1990s. Robert Serry mentioned as a turning point in the global geopolitical process NATO’s military operation, which resulted in the redrawing of the state borders of Serbia. He described the 1999 NATO bombings of Yugoslavia as the first flagrant violation of the principle of border inviolability in Europe.

Those events clearly demonstrated the danger of a situation when a peaceful dialogue through official UN channels established specifically for the diplomatic settlement of interethnic conflicts is replaced by the use of military force. In 1991, Serbia’s autonomous region of Kosovo proclaimed its independence as a result of an illegal referendum. The Kosovo Albanians elected their president, Ibrahim Rugova, and began their fight for independence. In 1996, the Kosovo Liberation Army was created. Large-scale riots flared up in the region’s Serb-populated areas with Albanian nationalists burning down houses, monasteries, and even entire villages, taking Serbs hostage and even killing them.

In 1998, the ethnic conflict spiraled into bloody armed clashes. Yugoslavia used military forces against Albanian radicals. On September 9, 1998, the NATO Council approved a plan for military intervention in the Kosovo conflict. On March 24, 1999, without UN sanction, NATO launched a series of bombing raids as part of Operation Allied Force, which continued until June 20, 1999 forcing the Yugoslav government to cease hostilities in Kosovo. The UN closely monitored the situation in Kosovo, but no sanctions against the NATO aggressors followed as a UN resolution condemning NATO’s actions as aggression garnered only three votes in favor (Russia, Namibia and China). Kosovo still remains a serious destabilizing factor in the Balkans. Over 60 countries, including Russia, China, India and Kazakhstan, have joined Serbia in refusing to recognize the sovereign status of Kosovo.

Robert Serry believes that everything that happens in the world is interconnected after the experience in Kosovo and the illegal NATO intervention was followed by the events in Libya that resulted in a regime change there.

“In turn, the Libyan conflict reflected on the crisis in Syria, thereby paralyzing the UN Security Council," he concluded.

Robert Serry also said that contradictory as accusations of Russia's interference in Ukraine’s affairs are, Russia still violated the principles of international law. He is still looking forward to significant changes in the settlement of the conflict in Ukraine.

“Something important happened inside Ukraine, I feel that with President Zelensky there is a very significant change in Ukraine. I am personally convinced that Zelensky wants peace. He said it consistently during the elections and afterwards,” Robert Serry said.

He added, however, that to achieve peace Russia and Ukraine need to put  issues of mutual recognition on the back burner and be ready to bring all parties, including non-state actors, into the dialogue.

Robert Serry also believes that the Minsk agreements are quite difficult to implement. “Minsk is a very difficult agreement to implement, I must say, as a conflict expert myself. There is no sequencing in Minsk, it’s not clear what needs to happen now and then, etc.; so the parties have to get a better idea how to implement it. Hopefully, step by step this conflict will be resolved. I feel that it is very unnatural for Russia and Ukraine to be in this situation. And the longer it lasts, the more difficult it becomes for both Russia and Ukraine.”

Russia believes otherwise, however, with President Putin having repeatedly stated that the Minsk agreements remain an uncontested basis for normalizing the situation in southeastern Ukraine.

In conclusion, it should be noted that the United Nations Organization, created in 1945, is really going through hard times now, criticized by many for being inefficient, unable to solve multiple armed conflicts, and to prevent crises from happening. One should also keep in mind, however, that the UN’s scope of work is not limited to issues of war and peace alone. Prominent among the goals enshrined in the UN Charter by its creators is the desire to strengthen international cooperation, enhance the role of diplomacy and promote dialogue in international relations. Notably, it offered a discussion platform to tackle a wide range of problems in various areas of interethnic cooperation: economic interaction, joint humanitarian missions and social partnership, intercultural dialogue and mutual support for cultural development, human rights activities and establishment of international legal norms. A large-scale program “Sustainable Development Goals” was launched this year for UN member states to combat poverty, hunger and gender inequality, as well as to work to ensure economic growth in poor countries.