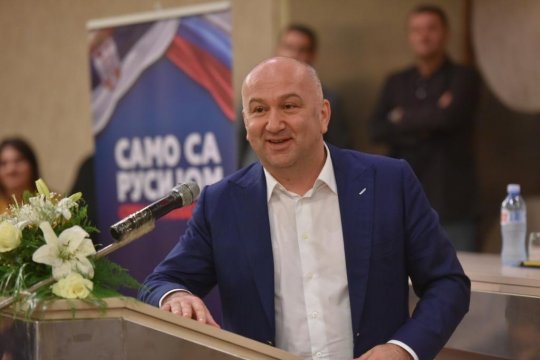 A top-level meeting scheduled to take place in Paris in September with the participation of President of Serbia, Aleksandar Vučić, the head of Kosovo, Hashim Thaci, President of France Emmanuel Macron and German Federal Chancellor Angela Merkel may well be disrupted, which could lead to a new wave of tension in the Balkans. As the summit draws nearer, the differences between the parties involved show no signs of diminishing, while the Serbian leadership is demonstrating ever more opposition to any agreements with Pristina.

A few days ago Chairman of the Serbian People’s Party and Minister of Innovation and Technological Development of Serbia Nenad Popovic called for walking out of talks with Kosovo leaders under the patronage of the European Union. He said that the 2013 Brussels agreements on normalization of relations between Belgrade and Pristina was “not working”. According to the minister, Serbia ought to “challenge the pseudo-state of Kosovo” at any costs and under any conditions.

“After all the events that took place last week with the participation of Western countries: the simulated summoning of the Prime Minister of Kosovo, Ramush Haradinaj, to the Hague-based Special Court for interrogation in connection with the crimes of the Kosovo Liberation Army, new accusations against Serbia for committing genocide against Kosovo Albanians, arrests of Serbs - all this adds to the fact that we have nothing to gain from European integration, and that the Brussels agreement is dead,” - Nenad Popovic emphasized. In his words, the political course of Serbia should follow a balance: “What I mean is that Serbia should develop step by step and strengthen political, economic and military cooperation only with countries that build equal relations with it, revering its sovereignty and territorial integrity in relation to Kosovo". [1]

Nenad Popovic is one of the key figures on the Serbian political landscape in the context of relations between Kosovo and the Albanians. In diferent years, he was responsible for building economic relations with the region, and for Belgrade’s policy in the three southern Serb communities of Bujanovac, Medveda and Presevo, adjacent to the Kosovo border. It is these areas that Hashim Thaci proposes to annex to Kosovo in exchange for passing to Belgrade the control over the northern Serb-populated areas as part of a “package agreement” on the exchange of territories. Nenad Popovic used to be one of the closest associates of the former President of Serbia Vojislav Kostunica, who called for more intensive cooperation with Russia, including within the framework of energy and infrastructure projects. It was during his term Russia and Serbia concluded a range of bilateral agreements, which enabled Serbia to become a key partner of Russia in the purchase and processing of energy resources.

The visit to the Hague by the Prime Minister of Kosovo, Ramush Haradinaj, which triggered so much criticism from Nenad Popovic, does look strange. However, according to reports, all this could involve a more complicated political scenario. On learningthat he was summoned to the Hague court, Ramush Haradinaj immediately announced his resignation from the post of head of the Kosovo government. The former chief of staff of the Kosovo Liberation Army (KLA) explained that he had no intention of jeopardizing the honor of the self-proclaimed state and its institutions. He remarked that his government’s ministers would continue to fulfill their duties and called on the president of the republic to announce early parliamentary elections. [2]

“I was summoned for questioning to the Special Court in the Hague as a suspect. The honor of the prime minister and the state must be preserved,” - he said on his Facebook page. [3]

According to Haradinaj, since he does not want to tarnish the reputation of Kosovo in any way, he will appear before the Hague Court, which was set up to investigate the activitgies of the KLA during the war, as a private person. Simultaneously, he expressed confidence that a new inquiry would not shake his innocence, confirmed by two acquittals of the International Criminal Tribunal for former Yugoslavia in The Hague. His case was run by Chief Prosecutor Carla del Ponte in person. However, in spite of all her efforts, in 2008 the Tribunal acquitted Ramush Haradinaj of charges of committing crimes against the Serbian population of the region. In 2010, the ruling was cancelled, but in 2012 a new acquittal came into effect. [4]

The unexpected summoning of Ramush Haradinaj to the Hague anew is in fact not connected with a sudden desire of the Western powers to finally punish the Kosovo prime minister for bygone anti-Serb crimes. For Brussels and Washington, his fierce opposition to agreements between Belgrade and Pristina is much more relevant. Over the past few months, this politician has been lashing out at Hashim Thaci for his "compromising" stance and for his intention to concede part of Kosovo’s territory to Serbia. To this end, he regularly organizes mass protests in Pristina. And given the popularity of the Alliance for the Future of Kosovo, of which he is the leader, there is a real possibility of Ramush Haradinaj assuming the post of Kosovo president, which is de facto could block any mediation efforts on the part of the European Union and which, of course, does not suit the EU leadership.

Such a development is fraught with unpredictable consequences, such as a crisis of European integration plans in Serbia and a reorientation of Belgrade’s policy from Brussels to Moscow and Beijing.

The American Wall Street Journal quotes Dan Coats, the outgoing Director of National Intelligence of the USA, as saying that Russia and China, “these two super-giants of Eurasia, are as close to each other as they were in the 1950s. Both Moscow and Beijing have been seeking to undermine the interests of the West, from Venezuela and Syria to Serbia. In addition, they have been stepping up cooperation in Africa south of the Sahara and have already found ways to lessen their rivalry in Central Asia. ” [5]

Meanwhile, support from top Western powers continues to be a major factor determining Kosovo’s sustainability - both political and economic. Recently, there has appeared a trend towards a gradual rejection of the self-proclaimed independence of Kosovo by states that previously recognized it. According to the Serbian side, a few days ago the Central African Republic (CAR) recalled its recognition of Kosovo, thus becoming the 14th country that has done so. Foreign Minister Ivica Dacic said in a program broadcast by the radio and television of Serbia that the CAR “cannot assume a position that is at odds with international law” and that it “supports the sovereignty of Serbia and the rule of law”. [6]

Ivica Dacic also said that unlike in 2015, when 92 states voted in favor of Kosovo joining UNESCO, in 2018 the number of such countries dropped to 73. “Undoubtedly, they cannot become members of any international organization, in which they would vote like they do in the UN”, - the head of the Serbian Foreign Ministry pointed out. [7]

Given the situation, a further widening of the gap between Belgrade and Brussels amid the West’s inability to make Kosovo authorities more cooperative will naturally lead to the erosion of the pro-European direction of Serbia’s foreign policy and will strengthen the positions of forces that advocate more ties with Russia and other “centers of power” outside the Euro-Atlantic space.