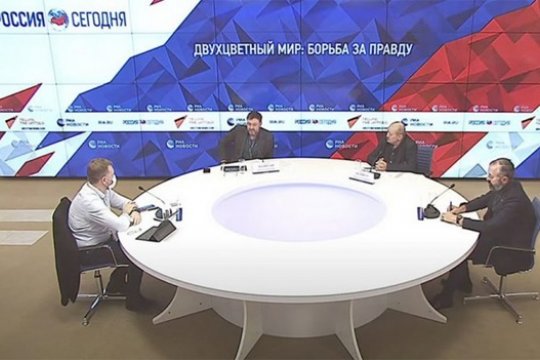 A "Two-color world: struggle for truth" roundtable was recently held at the multimedia press center of Rossiya Segodnya international news agency in Moscow.

The significance of the issue of equal access to the global information space for Russian news agencies, digital platforms and the media was underscored by the participation in the live and online discussion of such prominent media executives, journalists and specialists in the field of informatics, such as Foreign Ministry spokeswoman Maria Zakharova; Editor-in-Chief of Rossiya Segodnya news agency Margarita Simonyan; Valentin Bogdanov, US correspondent of the Russian State Television and Radio Broadcasting Company (VGTRK), Ksenia Fedorova, head of RT France; Yaroslav Skvortsov, Dean of the Department of International Journalism at the Moscow State Institute of International Relations; member of the Human Rights Council, executive director of the Rossiya Segodnya media group Kirill Vyshinsky, Secretary of the Union of Journalists of Russia Timur Shafir, Konstantin Malofeev, founder of the Tsargrad TV channel, and Pyotr Fyodorov, head of the VGTRK’s International Relations Directorate.

The participants focused on the root causes of the ongoing global information war, on the new channels and tools used in the struggle for people’s minds, on biased moderation and censorship, on where all this could bring us and how to deal with it. Also presented at the roundtable was, the media group’s own study - “Octopus: Russia's Interference in the US Elections."

When opening the media forum, its moderator, Rossiya Segodnya’s Director of Public Communications Pyotr Lidov, asked the participants, who have shared views on this problem, to focus more on the ways to solve it. He said that the outgoing year 2020 had brought along a string of global events that have changed the world, first and foremost the COVID-19 pandemic, which took the people’s attention away from the growing eternal problem of the world’s division into two camps: the US and its allies, and their opponents, with the latter being fought on economic, military-political and information levels. A major role in this war is assigned to the world's leading media outlets, which “jam,” label as “unreliable” or “biased” all Russian, pro-Russian and alternative points of view. According to Lidov, 95 percent of US publications show Russia in a negative light. In addition, Europe and the United States are "cleansing” the information field from the Russian view on events.

Facebook, Twitter and YouTube’s joining the campaign of defamation of the Russian media added a new dimension to this information warfare. (YouTube is watched by over 30 million Russian viewers each day, but it still has blocked the accounts of about 200 Russian media outlets with a total audience of about 10 million).

Without providing any reason, these global platforms tag Russian media content as "state propaganda," restricting access to it and deleting individual accounts and groups. This, in fact, is a violation of Article 29 of the Russian Constitution, which defines censorship as a breach of freedom of expression.

How should and will the domestic media community respond to this?

“We see political undertones in the US foreign policy, aimed to shut out from the global information space the sources that provide an alternative view of things and are viewed as rivals,” Zakharova said.

She added that as a mirror response, Russia is currently drafting a federal law that provides for additional measures to counter threats to national security, including ramping up pressure on foreign media outlets and their owners by restricting their access to technical means of communication, introducing heavy fines, etc.

Rossiya Segodnya Editor-in-Chief Margarita Simonyan noted that in terms of social platforms Russia should leave the West “far behind, just like China has already done.

“We need to do this and join hands with the state,” she said. “We have powerful market players and I’m sure they can come up with a product many times better than YouTube,” she added.

“We must understand that Mail.ru and Yandex, our two largest aggregators, are very small compared to the US giants, which are worth trillions of dollars. Therefore, in order for “ours” to be able to fight them and create a video hosting platform like YouTube, we must understand that we are talking about direct government support," he noted.

Timur Shafir, Secretary of the Union of Journalists of Russia, likewise backed the idea of ​​strengthening Russia’s own platforms, emphasizing, however, that this can’t be done overnight.

“Google and other foreign IT giants are transnational corporations. There is one language that they and the monopolists understand, and this is a financial claim. This is something that needs to be done,” he said. He also called for the use of sanctions and "repressive actions" against Western IT corporations.

Anatoly Matveichuk, the Editor-in-Chief of the private news agency ANNA-News, described the recent destruction of all eight of the agency’s YouTube channels as just one example of discrimination. In 2015, ANNA-News exposed a White Helmet scam with chemical weapons in Syria. Not just blocked, but completely destroyed with all content, subscriptions and tens of millions of views. This is despite the fact that, as was mentioned earlier,   daily visits to YouTube from the RU zone amount to about 30 million. Even if 50 cents are monetized for a visit, this is makes around $15 million a day.

For Matveichuk, it is obvious that our only possible next step is for Russian IT companies to develop digital platforms and video hosting site that would be more sophisticated than the American ones. Just like it was done in China. However, until such digital platforms are created, the battle for the minds of Internet users continues. Just as Maria Zakharova noted, two or three correctly submitted news can change everything around us, which means that the world still remains two-colored.

By the way, the very same things are happening with publications working abroad, and not only on the part of social networks, but also the countries where they operate.

This is exactly the case with RT France, which, despite its status as a French channel manned by French journalists, comes under regular attacks by mainstream media, its chief editor Ksenia Fedorova complained.

As a result of this discussion, a list of proposals for lawmakers will be prepared as part of a memorandum on countering Internet censorship.