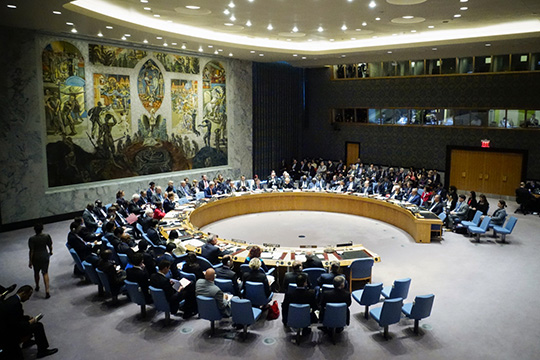 Russia’s acting Foreign Minister Sergei Lavrov made it clear once again recently that it is high time the United Nations Security Council had among permanent members representatives of India, Brazil and the African continent. Speaking at the “Raisina Dialogue” International Conference in New Delhi, Mr.Lavrov reminded the participants in the event about Moscow’s consistent appeals for the UN Security Council to clear the current uncertainty and invite representatives  from developing countries as permanent members.

The UN Security Council plays a crucial role in the United Nations Organization – the world’s most authoritative forum for countries to coordinate their positions and secure their interests in nearly all spheres of human activity. Under the UN Charter, the Security Council answers for «maintaining peace and global security». Thus, revamping the United Nations and modernizing the entire architecture of global governance are hardly possible without an overhaul of this highly important international institution. One of the major issues to be addressed in the course of the UN reform «is to search for ways to ensure the interests of all regions and guarantee the appropriate representation of all countries»[i]. Given the situation, many UN member countries call for the enlargement of the UN Security Council.

Sergei Lavrov has repeatedly dwelled in detail on Russia's position on the issue of expanding the make-up of the UN Security Council. Russia is in favor of  increasing the number of members of the Security Council. Meanwhile, the reform should not have a negative impact on the governance and effectiveness of the Security Council. “Efficiency in operation” is one of the key principles. Another principle is that all regions, all centers of world development should be represented. The most reasonable number of members is “a bit over 20” [ii]. In January this year, Sergei Lavrov emphasized yet again Moscow’s commitment to the principle of fair representation of all the leading regions of the world, with the mandatory participation of developing countries. In this context, the head of Russian diplomacy said, “we maintain that India and Brazil fully deserve a seat on the UN Security Council, along with a representative of Africa. We believe that the goal of the UN Security Council reform should be to ensure a better attitude to developing countries from the main body of the Organization ”[iii].

The absence of India among permanent members of the Security Council seems particularly illogical in the past few years, if not decades. At present, India is the world’s second in the number of people residing there. And by 2025, according to UN experts, it will become the most densely populated country in the world [iv]. India has nuclear weapons. Since coming to power in May 2014, India’s incumbent leadership has been pursuing a course to strengthen the country's international standing and its status as a regional leader and “a global player to be reckoned with”. The economy of India by nominal GDP, according to the IMF, is the world’s 5th.

All major states of Greater Asia, which is steadily turning into a global political and economic hub, as well as all external powers, signal interest in close cooperation with New Delhi while pursuing both tactical and strategic, long-term agendas. However, there are grounds to believe that in the foreseeable future, India will try to maintain its commitment to yet more pragmatic than before strategy of “non-alignment”. This would mean that New Delhi will be able to play not only an increasingly prominent role in Asia, but will also become one of the main candidates to speak for a considerable number of developing countries. India will thus be among those who seek to avoid being squeezed into the rigid quasi-block structures of the new configuration of international system.

Unlike Asia, Latin America and Africa are “nowhere” among permanent members. However, the two regions cannot come to consensus on nominating a single candidate. Among the most promising candidates from Latin America experts name Argentina, Brazil and Mexico. Brazil, according to the IMF, is currently the number one economy in Latin America, the second in the Western Hemisphere and 8th in the world. Its economic and industrial sectors, unlike most of its neighbors’, are well diversified. The country has succeeded in avoiding the “resource trap”. In terms of population, Brazil is sixth in the world. The potential of the Brazilian army among the states of the Western hemisphere is considered to be the second after America [v]. However, a number of Russian experts say that some of the current leadership of Brazil came to power under the slogan of criticizing “Brazil’s participation in multilateral international forums.” [vi]

In the past ten to fifteen years, Africa has been attracting ever more attention of international community. The rapid growth of the continent’s population along with an increase in the share of the working population can, under certain conditions, contribute to economic growth, Republic.ru says. A number of experts believe that the African economy is capable of as impressive an economic breakthrough as Southeast Asia made in the second half of the 20th century. This is a fact acknowledged by all the leading powers. According to the Economist, between 2010 and 2016, more than three hundred new foreign diplomatic missions opened in African countries.

At present, Africa unofficially has three seats of non-permanent members ofthe Security Councils. South Africa, Egypt and Nigeria are competing for the right to represent Africa in the Security Council on a permanent basis. In the context of the transformation of the system of international relations, the development of ties between 54 African countries promises a lot in terms of boosting geopolitical influence. The opinions of African countries will play an increasingly prominent role in many international forums and in international institutions. However, given the current situation, Africans no longer need to "take   sides." They can work effectively with different competing powers at a time. Pragmatists in the African leadership know only too well how important it is to maintain a constructive balance of interests amid competition between global powers.

Overall, it appears that a possible strengthening of the positions of India and Brazil in the UN would give a new impetus to their potential in terms of their ability to offset the influence of other powers, both regionally and globally. India and Brazil, together with Russia, China, and Africa’s second economy, South Africa, are already successfully promoting the principles of a multipolar and fair world order within BRICS. They are also developing cooperation with other leading powers in the G20. In the economic sphere, Brasilia and New Delhi are expanding cooperation with other developing countries, providing them with significant assistance in developing modern sectors of the economy, increasing their competitiveness and developing their entrepreneurship. As for Africa, as Sergei Lavrov said in an interview with Hommes d’Afrique in 2018, the appearance of an African representative in the UN Security Council alone can add “more value” to its work [vii].

Skeptics fear that any enlargement of the Security Council, quantitative or geographical, “with the preservation of the right of veto and the apparent differences among permanent members on fundamental international issues ... will make the process of reaching agreements more complicated” [viii]. Indeed, as  new centers of international influence become stronger, the risks of collisions and clashes of interests between parties involved are bound to increase. Under these conditions, all proposals coming from Moscow are aimed at adjusting the work of the UN Security Council so as this key United Nations body will be able to not only preserve, but also to cement its role as a top platform for resolving the inevitable world controversies.

In particular, it is necessary to overcome the dangerous trend that has emerged in recent decades. We mean that a number of states tend to bypass the Security Council, at times even trying to circumvent the entire system of international law. Sergei Lavrov pointed this out in the course of discussions under the auspices of the "Raisina Dialogue". “If you have noticed, our Western partners are making less and less use of the language of international law. Instead, they have coined a new term, which they refer to as the "rule-based order." “One-sided methods and the attempts to impose one’s selfish ideas on others are  moving us more and more away from solving global challenges of transnational nature.” In this regard, a number of Russian observers make it clear that Brazil and India  "call for a comprehensive strengthening of the system of international law" [ix].

The need for restructuring the UN Security Council, despite certain difficulties, is beyond doubt. What is also clear is the fact that there are new candidate countries worthy of taking the place of permanent members of the key United Nations body. However, an occasional feeling that the UN Security Council has chosen to “retreat” or that it has been “paralyzed”, without any doubt, does nothing to improve the reputation of either the Security Council or the United Nations as a whole. In these conditions, the international community needs to find solutions that will make the UN mechanisms better and more efficient without jeopardizing all the positive experience gained over the past decades. It is necessary to walk along the fine line that separates the continuation of constructive work in the absence of unanimity and the attempts to reach agreement at any cost.

[vii] According to official materials of the Russian Foreign Ministry.